History of the “Lepus Cornutus” 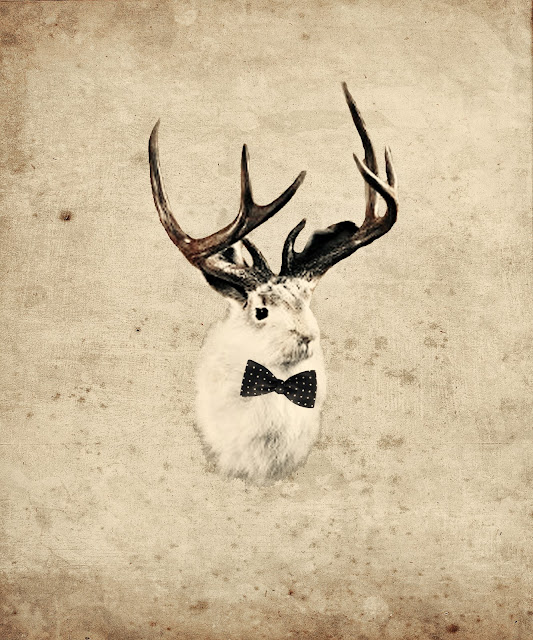 Hahaha here are some facts about the jackalope that you probably didn’t know:

·         Traits: Sure footed and agile. Nocturnal. Opportunistic. Crude ability to mimic campground chatter. Fondness for whiskey and Harley Davidson oil lines. Will attack if cornered or provoked. To avoid injury, quickly fall to the ground, remain calm and still while humming the Roy Rogers song, "Happy Trails to You."

Hahahaha I love that last one…I hope everyone knows the tune of Happy Trails to You!

Here is a little history:

The jackalope is an antlered species of rabbit, unfortunately rumored to be extinct, though occasional sightings of this rare creature continue to occur, suggesting that pockets of jackalope populations continue to persist in its native home, the American West.

The Jackalope is an aggressive species, willing to use its antlers to fight. Thus, it is also sometimes called the "warrior rabbit."

Jackalopes possess an uncanny ability to mimic human sounds. In the old West, when cowboys would gather by their campfires to sing at night, jackalopes would frequently be heard singing back, mimicking the voices of the cowboys. Jackalopes become especially vocal before thunderstorms, perhaps because they mate only when lightning flashes (or so it is theorized).

When chased, the jackalope will use its vocal abilities to elude capture. For instance, when chased by people it will call out phrases such as, "There he goes, over there," in order to throw pursuers off its track. The best way to catch a jackalope is to lure it with whiskey, as they have a particular fondness for this drink. Once intoxicated, the animal becomes slower and easier to hunt.

Well, now you know a little bit about jackalopes…how to escape them and lure them in! Keep your eyes peeled the next time you’re out riding horse or camping and maybe you’ll catch a glimpse of the allusive fuzz balls!


I found these facts from http://www.bikernation.net/jackalope.htm
Posted by Cheyanne Maki at 7:05 AM 8 comments:

I am superstitious person. I think I am that way just for that feeling you get. Like how good it feels to know you avoided walking under a ladder, or dodging around a black cat and not letting it cross your path. Or the tingle you get when a broom falls, and you know trouble is coming. And I will pretty much believe any old folk tale and county lore I’m told. I just can’t help it. I mean watching BFRO (Bigfoot Field Researchers Organization) on NatGeo has only confirmed my belief of the existence of Sasquatch!


So talking about these old folk lores and such, I just finished reading a book called The Girl Who Chased the Moon.  And in the very back, after the whimsical story’s ending, there was something that I’ve never heard of. There was a list of names and descriptions of all of the full moons for every month. Did you know that the Native Americans named the moons way back when? Neither did I.
According to the Farmer's Almanac, the Native Americans who lived in the area that is now the northern and eastern United States kept track of the seasons by giving distinctive names to the recurring full Moons. Each full Moon name was applied to the entire month in which it occurred. These names, and some variations, were used by the Algonquin tribes from New England to Lake Superior.
I found the names and descriptions very interesting and now my goal is to memorize them all! I just thought this was really neat, so I want to share them with you. And since I haven’t illustrated in a while, I thought I would create some visuals to go along with the history… 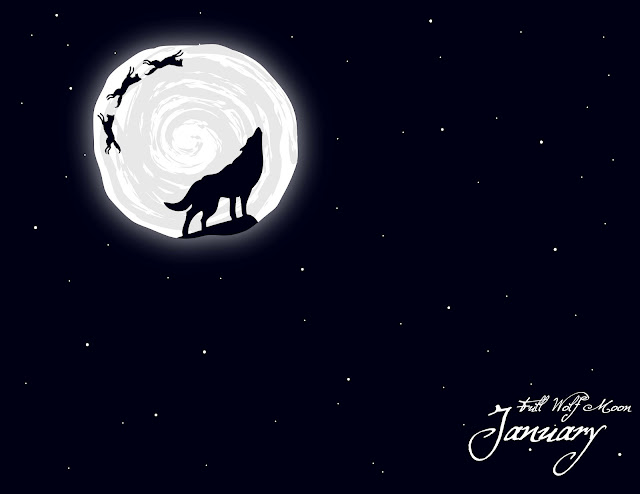 This full Moon appeared when wolves howled in hunger outside the villages. It is also known as the Old Moon. To some Native American tribes, this was the Snow Moon, but most applied that name to the next full Moon, in February. 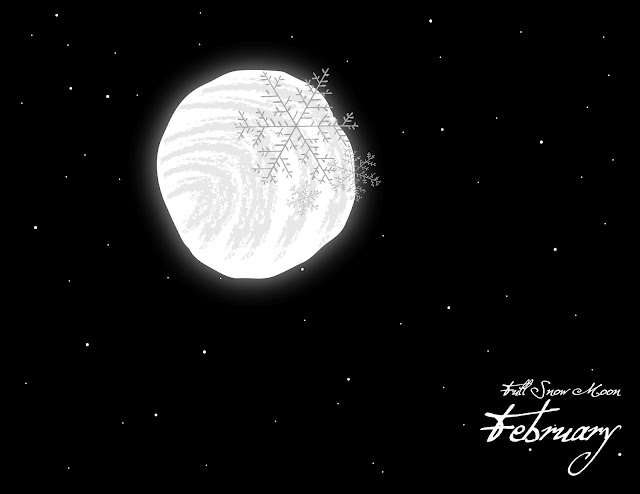 
Usually the heaviest snows fall in February. Hunting becomes very difficult, and hence to some Native American tribes this was the Hunger Moon. 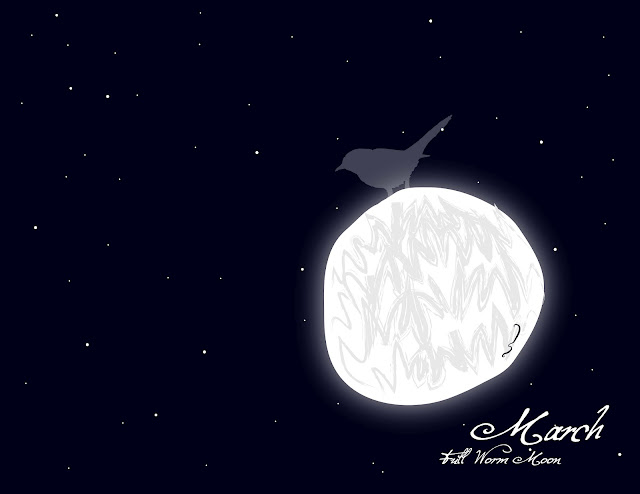 
At the time of this spring Moon, the ground begins to soften and earthworm casts reappear, inviting the return of robins. This is also known as the Sap Moon, as it marks the time when maple sap begins to flow and the annual tapping of maple trees begins. 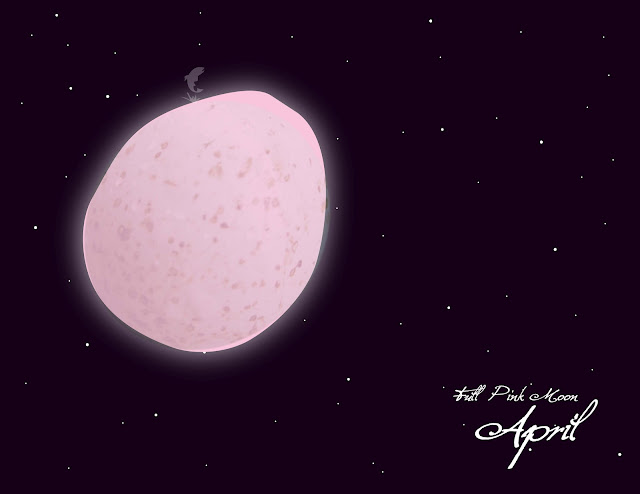 April: Full Pink Moon
This full Moon heralded the appearance of the moss pink, or wild ground phlox—one of the first spring flowers. It is also known as the Sprouting Grass Moon, the Egg Moon, and the Fish Moon. 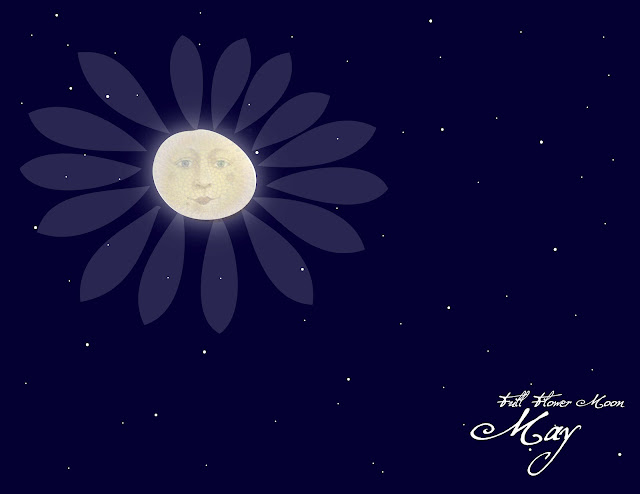 
Flowers spring forth in abundance this month. Some Algonquin tribes knew this full Moon as the Corn Planting Moon or the Milk Moon. 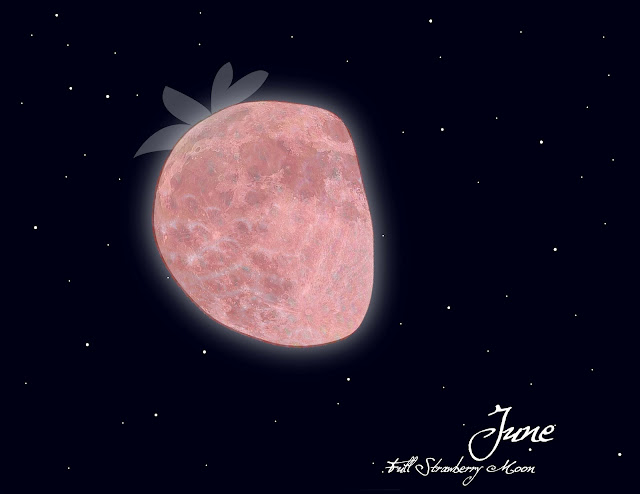 June: Full Strawberry Moon
The Algonquin tribes knew this Moon as a time to gather ripening strawberries. It is also known as the Rose Moon and the Hot Moon. 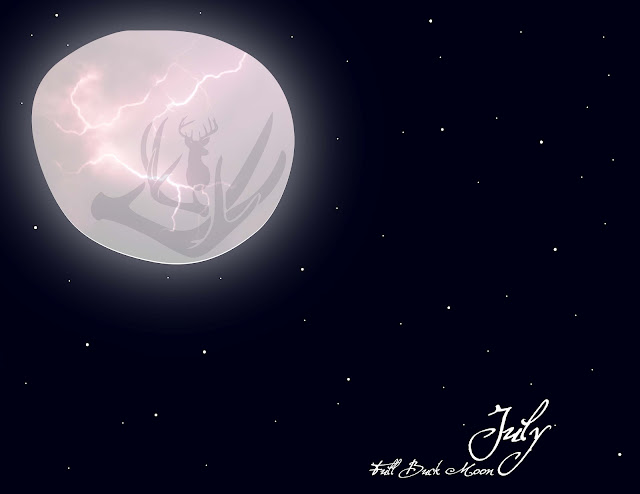 July: Full Buck Moon
Bucks begin to grow new antlers at this time. This full Moon was also known as the Thunder Moon, because thunderstorms are so frequent during this month. 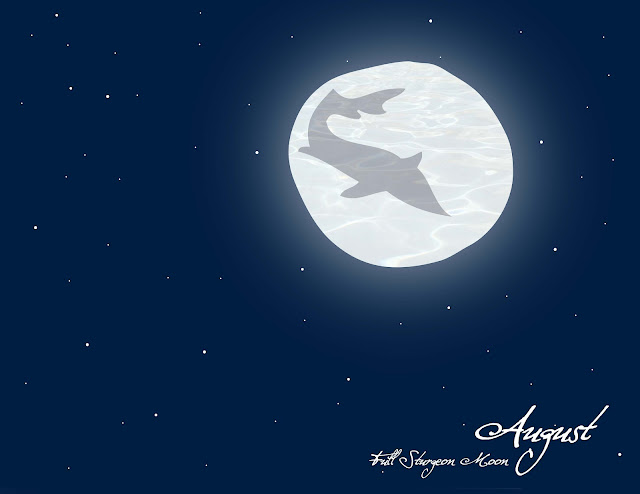 
Some Native American tribes knew that the sturgeon of the Great Lakes and Lake Champlain were most readily caught during this full Moon. Others called it the Green Corn Moon or the Grain Moon. 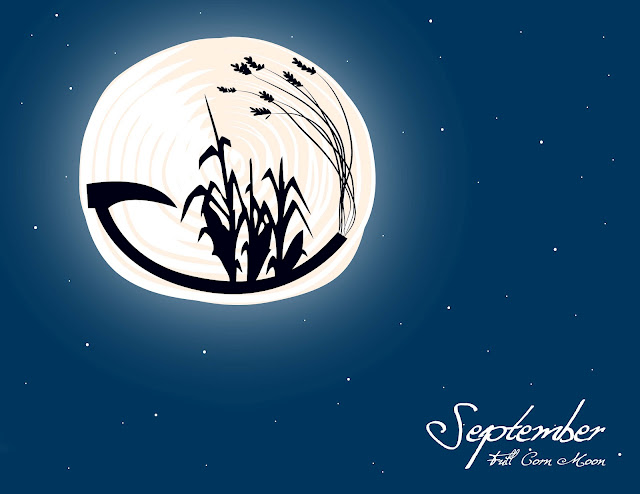 
This full Moon corresponds with the time of harvesting corn. It is also called the Barley Moon, because it is the time to harvest and thresh the ripened barley. The Harvest Moon is the full Moon nearest the autumnal equinox, which can occur in September or October and is bright enough to allow finishing all the harvest chores. 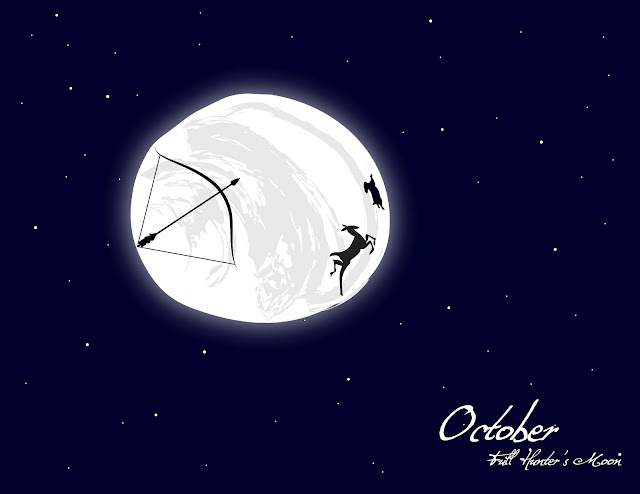 
This is the month when the leaves are falling and the game is fattened. Now is the time for hunting and laying in a store of provisions for the long winter ahead. October's Moon is also known as the Travel Moon and the Dying Moon. 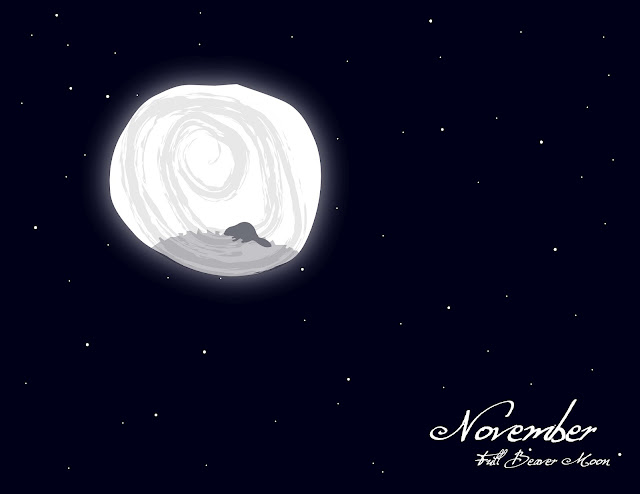 November: Full Beaver Moon
For both the colonists and the Algonquin tribes, this was the time to set beaver traps before the swamps froze, to ensure a supply of warm winter furs. This full Moon was also called the Frost Moon. 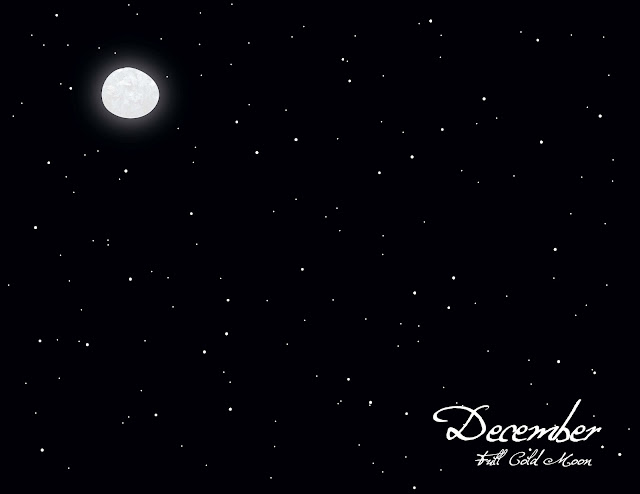 
This is the month when the winter cold fastens its grip and the nights become long and dark. This full Moon is also called the Long Nights Moon by some Native American tribes.

I hope you enjoyed learning about some moon history!!! Now you will always know when it's time to set traps for beavers or when to pick strawberries!
Posted by Cheyanne Maki at 10:45 AM 7 comments: 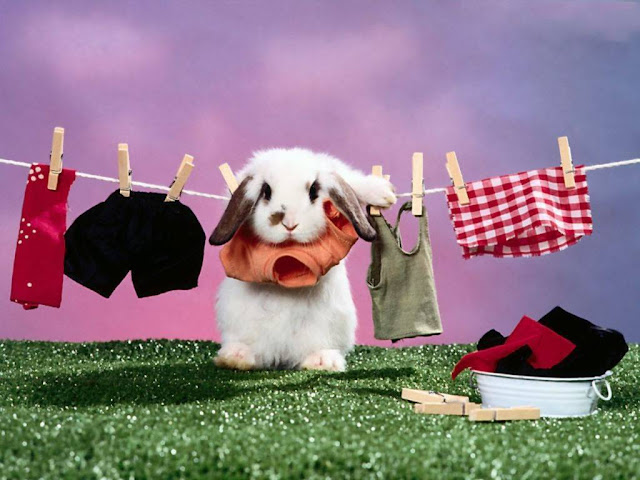 Happy Easter everyone! Have a great weekend!
Posted by Cheyanne Maki at 8:24 AM No comments:

And the winner is...

Thank you to everyone who participated in my giveaway! Look for more in the future! Now for the winner... 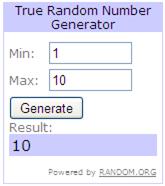 Comment # 10! Congrats Amy Lee! You are the winner of the Country Girl Cuff! Thank you for entering!
Posted by Cheyanne Maki at 3:47 PM No comments: 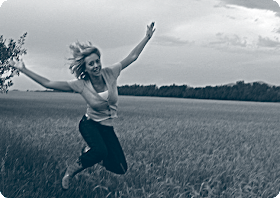 Hulloo there! Welcome, I'm Cheyanne and I started this blog to share anything and everything that inspires me...from pickled eggs to leather patterns to how the pen tool (design geek, I know) changed my life. So hang your busy day up on the line and join me for an adventure filled with my wacky thoughts, country inspirations and random hobbies!

Become a fan of Hang it on the Line on Facebook!

Check Out My Shop :

The longest recorded flight of a chicken is 13 seconds. 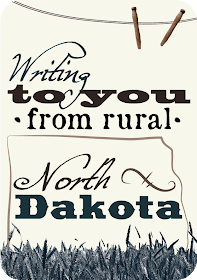 Hang it on the Line is in the Blog Guidebook: